Speculation of tax reform, a more hawkish Fed, rising inflation expectations and signs of life for the U.S. dollar helped small caps break out of their 2017 rut relative to large caps. For much of 2017, small caps had reversed all of the "Trump bump" that launched the S&P 600 to a 15% excess return to the S&P 500 in 2016. However, small caps have jumped 10% since August 21 reaching a new high and outperforming the S&P 500 by almost 7%.

Tax reform may shake up small-cap sector performance if cuts are substantial. Sentiment toward tax-overhaul prospects has likely aided the recent rally in small caps. The median effective tax rate for the S&P 600 is almost 32%, compared with 28% for the S&P 500. By sectors, telecom, discretionary and utilities have the highest median effective tax rates, while real estate, information technology and energy pay the lowest.

After falling to their lowest level against large caps since the November election, small-cap valuations have jumped. Prices this month are at 20.7x forward earnings, relative to the five- and 10-year averages of 18.8x and 17.5x, respectively. A domestic-growth rebound that fuels inflation expectations may be necessary for small caps' relative valuations to continue to outperform large caps in the months ahead. Fading inflation expectations for much of 2017 has been a significant cause of concern for small-caps. The dollar, oil prices and perceived policy changes in Washington all will likely play a part in small caps' near-term fate.

The dollar rally over the last few weeks has likely supported a surge in small-cap stock prices, but if analysts’ are correct, the greenback may quickly turn from friend to enemy. Out of all G10 currencies, only the British pound is expected to depreciate against the dollar through the end of 2018, according to the median analyst forecast. While the dollar has recently received a boost with the hawkish Fed and tax chat in Washington, it may remain subject to policymaker pivots in the months ahead.

In the chart above, the ratio between the large-caps (S&P 500) and small-caps (Russell 2000) indexes rebounded from an almost three-decade low in March 2014.

Historically, large-caps have outperformed small-caps in a flattening yield curve environment. A flattening curve points to more challenging economic conditions down the road, and typically bad news for economically-sensitive segments and small-caps. 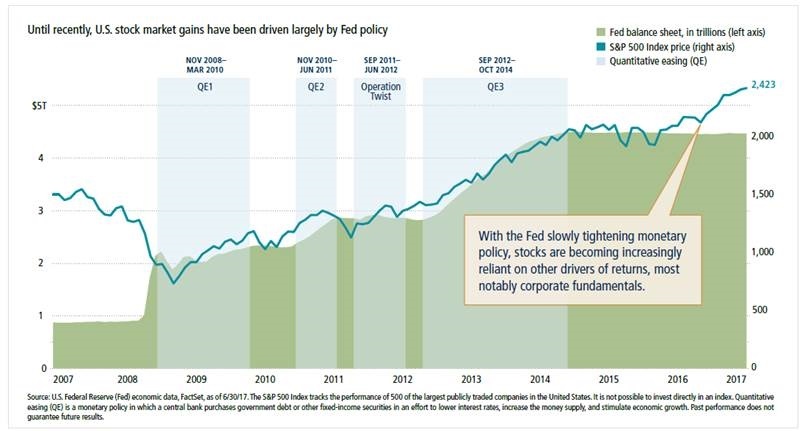 The Fed noted short-term disruptions in the economy from the recent hurricanes, but also pointed out that past experience suggests storms are unlikely to materially alter the course of the national economy over the medium-long term. While higher gas prices following storms will likely boost inflation temporarily, inflation on a 12-month basis is expected to remain somewhat below 2% in the near term, and stabilize around the Fed’s 2% objective over the medium term. The Fed kept interest rates unchanged at the September meeting, but they still expect one more interest rate hike in 2017, setting the stage for a 25bp increase in December. The Fed forecasts three interest rate hikes in 2018.

The impact of Hurricane Harvey has started to enter the economic data -- first in August’s unit motor vehicle sales and now in the weekly jobless claims filings. Given the widespread disruptions to utility and transportation networks, which likely delayed many individuals from filing, the 62k increase in the latest week will probably move higher over the next week or two. Around Hurricanes Katrina and Sandy, claims jumped by roughly 80k-100k, so there is historical precedent for further deterioration.

Initial jobless claims surged 62k to 298k in the week ended Sept. 2, from the previous week’s 236k. This significantly exceeded the anticipated 245k in the consensus estimate and even topped the highest estimate of 270k.

International investing involves special risks such as currency fluctuation and political instability and may not be suitable for all investors. These risks are often heightened for investments in emerging markets.
Investments will fluctuate and when redeemed may be worth more or less than when originally invested. All information is believed to be from reliable sources; however, we make no representation as to its completeness or accuracy.