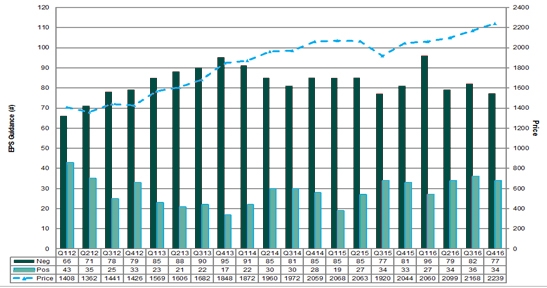 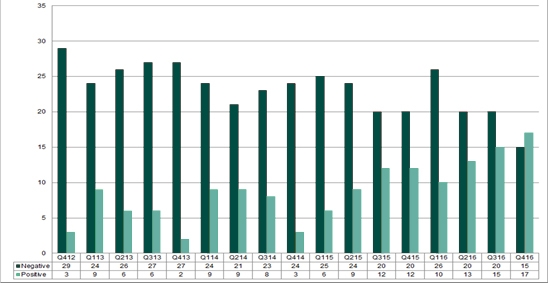 The race for president of the United States ended with an upset win for Donald Trump over Hillary Clinton.  Mr. Trump campaigned on a few broad themes, including cracking down on immigration, tearing up U.S. trade deals, and bringing jobs back to the U.S., particularly in manufacturing.  Now the question is, how will Mr. Trump turn these ideas into actual government policy, especially on the economic front?

At this moment, both markets and economic agents seem to believe in strong expansionary effects of future “Trumponomics”.  It remains to be seen to what extent Trump will be able to meet these high expectations.

“Trumponomics” not yet Clear

Trump’s policy plans have become somewhat clearer, although a lot remains vague.  On the fiscal side, Trump will probably focus on tax cuts.  Spending cuts will likely be used largely to fund spending increases in other areas.  The size of his fiscal plans is, however, not very clear yet.  A realistic estimate of the effective growth stimulus is therefore still very difficult.  What seems to be clear is that government debt under the Trump presidency might rise significantly in case of a fiscal stimulus, as illustrated by estimates of several US institutions.

Throughout his 17-month campaign for the White House, Trump made many promises but provided few details on how he would achieve them.  In September 2016, he gave a policy speech to the Economic Club of New York where he presented some of his economic plans. One of the headline promises from this speech was his plan to increase U.S. economic growth to at least 3.5%.  Since the “great recession” of 2008-2009, economic growth has been slow to recover, with annual economic growth averaging just 2.2% over the last six years.  This compares to a post-WWII average of 2.9%; looking back at the last eight decades, we have not seen a decade with growth of 3.5% or higher since the 1960s.  No details have been presented on how we would achieve these high growth numbers, but the assumption is that Trump’s plans for reducing regulation and lowering taxes would get us there.

With respect to changing tax policy, Trump’s plan would reduce the seven individual tax brackets that we have now to just three: 12 percent, 25 percent, and 33 percent.  He also proposes significant reductions in corporate taxes, all of which are in line with tax plans proposed by congressional Republicans.  However, Trump is at odds with his party on the topic of international trade.  The Republican Party has traditionally supported open trade, but Trump has said that on his very first day in office that he will announce his intention to renegotiate NAFTA or withdraw from the deal entirely.  While most major changes to trade policy need to go through Congress, the president does have the power to unilaterally impose tariffs in certain circumstances.

Regarding job growth, Trump claims that his economic plan would create 25 million American jobs over 10 years, implying 2.5 million jobs would be added on average per year.  We have seen numbers like that during the current expansion: 2.59 in 2012, 2.53 in 2015, and 3.1 million so far in 2016.  However, current demographic trends make consistent and sustained employment growth of that magnitude over the next decade challenging.  The last of the baby boomers will reach retirement age over the next 10 years, and we’ll continue to see more and more of them leave the labor force.  Because of the baby boomers, growth in the working age population grew an average 1.8% per year in the 1960s and 1970s; since 1980, it has averaged just 1.2%.  In order to increase the labor force substantially, that leaves a few scenarios: lure in people of working age who have pulled out of the labor force for various reasons, encourage people to retire later, or increase immigration.  The last option is historically how the U.S. has avoided the aging problem facing many other developed countries, but Trump’s strong stance on immigration presents a hurdle.

Regarding trade it has become clear that Trump is not totally against free trade but that he prefers bilateral trade agreements above regional ones.  He will replace the Trans Pacific Partnership (TPP) with bilateral trade agreements, which would certainly mean an efficiency loss.  A total withdrawal from NAFTA, the trade agreement with Canada and Mexico, or a trade war with China are highly unlikely.  After all, Trump is still bound by the rules of the World Trade Organization (WTO).  Overall, the economic impact of all these ideas remains uncertain.  Yet, at this moment both markets and economic agents seem to believe in strong expansionary effects of future “Trumponomics” for the US economy.  It remains to be seen to what extent Trump will be able to meet these high expectations.  A downward correction is likely once the presidential honeymoon period is over and the actual economic effects become clearer.

The Trump election also poses some risks for emerging economies.  At this moment, emerging markets are in an expansionary phase after their crisis in 2015.  Especially commodity exporters like Russia are doing well supported by the gradual increase of commodity prices.  The stabilization of Chinese activity also contributes to the general recovery of its peers.  The real estate boom and large spending by the Chinese government are still the main factors supporting growth.  Yet, portfolio flows sharply collapsed following the Trump win, after being positive for several months. Expectations of a stronger USD, higher US bond yields and a more antagonistic stance of the US towards trade and immigration already weighted heavily on capital flows towards emerging markets.  Given the less friendly future environment for global trade and investments, concerns about the emerging market growth outlook have risen.

The negative outcome of the Italian referendum turned out to be a non-event on financial markets.  However, the no-vote implies that much needed economic reforms in Italy will be postponed and that a fast rescue plan for the Italian banks is less likely.  What will happen after Prime Minister Renzi’s  resignation, remains uncertain.  But the risk that the political uncertainties will have negative spillover effects to the real economy has increased. Furthermore, the outcome of the referendum could be seen as a confirmation of the growing anti-establishment feelings in the eurozone.  With upcoming elections in the Netherlands, France and Germany this is a reason for concern, adding to Trump-related uncertainties

Our in-house investment committee develops portfolios and manages the securities and asset allocation within the portfolios. The team evaluates economic and market conditions to determine appropriate level of asset mix needed in our investors’ portfolios and Tompkins’ investment philosophies.

Tompkins Financial Advisors believes that a passive buy-and-hold approach is not in the best interest of our clients. In contrast, we remain dedicated to our clients’ financial longevity through adaptive risk management. At Tompkins Financial Advisors, we are committed to practicing a more responsible and sustainable Common Sense Investment approach that partners “Right Kind, Right Reason” diversification with proactive risk management.