Searching for Value Beyond Borders

More growth, more record highs, more uncertainty and more risk: the leading U.S. market theme today seemingly is one of quantity—more of virtually everything. We do expect one exception to the trend of “more”—returns.  We anticipate modest returns from U.S. equities due to valuation and political realities.  Consequently, we see even more need for active portfolio management and investor discipline.

Elevated US equity valuations create a rationale for moving beyond borders. Any given year’s total return is difficult to predict, but equity valuations have been more predictive of longer-term returns.  Relative to the long-term average cyclically-adjusted price-to-earnings (CAPE)* ratio (18x), current valuations (29x) point to a more muted return outlook going forward.  For core equity allocations, we believe a transition in strategy may be warranted as domestic returns moderate. 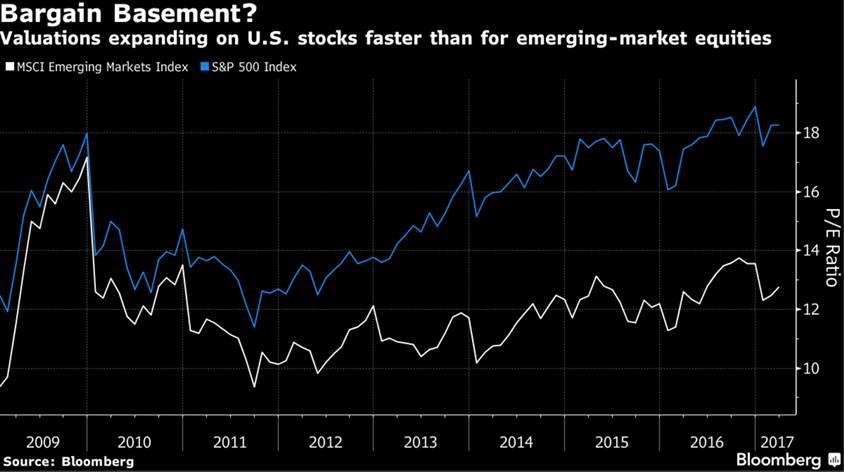 One idea for those who value potential growth more than stable principal value is investment in international markets, particularly in emerging markets. These are a group of developing countries that are becoming more advanced and have the following characteristics: a higher gross domestic product rate; a lower level of debt; an improving standard of living; superior demographics; an improving capital market infrastructure; and a market exchange with regulatory oversight.

About 23 countries, including India, China, and Chile, meet such standards according to the International Monetary Fund, S&P and other organizations.

Investors who have never considered emerging markets before may be surprised to learn that in 2016, for the first time in several years, emerging markets outperformed their developed market (countries such as the U.S. and Europe) counterparts.  As of the week ending March 24th, The MSCI (formerly Morgan Stanley Capital International) Emerging Markets Index returned 12.64% in U.S. dollar terms, while the MSCI All Country World Index returned 6.52%.  This means that after several years of recent underperformance, there are some signs of positive trend changes for emerging markets.

Since the U.S. elections in 2016, the global rally in risk assets has reflected optimism about aggressive fiscal policies from the United States.  Accelerating global growth has been particularly important in the emerging world.  Emerging market economies are expected to grow at their fastest pace in almost three years, driven by Brazil, Russia and China.  Although oil prices have recently seen a pullback, commodity prices have generally remained stable, supporting the emerging market economies that rely on them for expansion.

The global recession of 2008 weeded out weaker companies throughout the world. In developed countries, this resulted in markets that have gone up somewhat in relative value, but not significantly. In fact, developed markets today are highly leveraged and have an older and smaller working population. These factors suggest less opportunity for growth. Emerging markets also experienced belt tightening caused by the global recession, but this austerity resulted in stronger balance sheets and better efficiencies.

Some Caveats
Emerging markets do present some risks and variables that need to be actively managed by professional advisors. They include the following:

- While they have strengthening financial systems, some emerging market countries remain vulnerable to corruption and weak regulatory oversight.
- Emerging markets could be impacted by developed countries’ apparent move toward populism and protectionism.  This could hamper trade and global growth.
- The rise of commodity prices could slow, which could have a negative effect on emerging markets.
- The U.S. dollar could continue to strengthen, which would make emerging markets investments less desirable.

A heavier weight to assets in an investor’s country of domicile is a common investment behavior known as home-country bias. The chart below shows the U.S. as a percent of global GDP and U.S. stocks and bonds as a percent of global capital markets. Those proportions are much smaller compared to the average U.S. investor's allocation to U.S. assets, which suggests that U.S. investors may be underinvested in international assets. 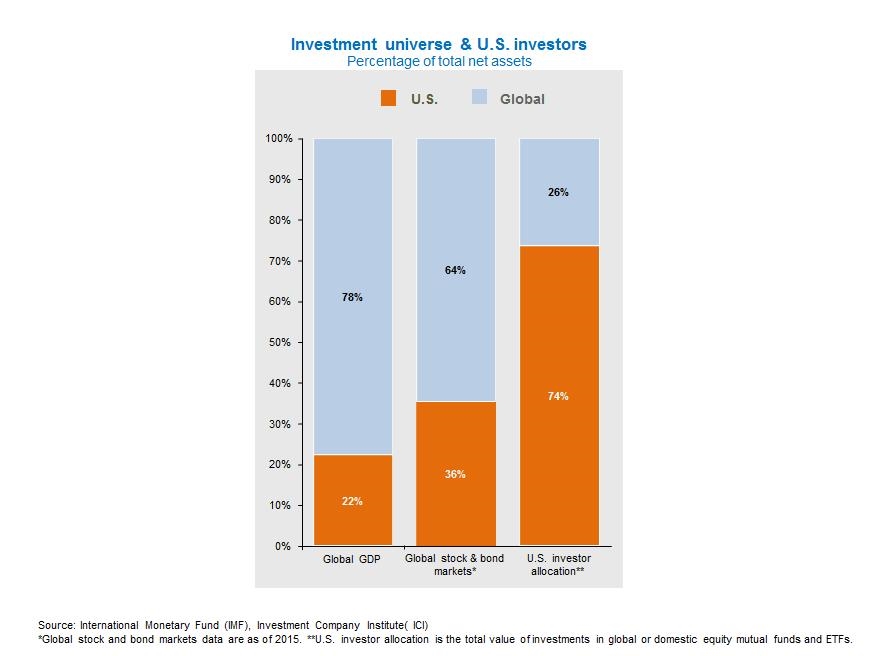 In our investment portfolios, we are sufficiently allocated to emerging and international markets.

The bottom line is that emerging markets may not be right for investors who are focused primarily on preserving principal and generating current income. But for those who want to diversify geographically and take advantage of potential growth in economies that are becoming more stable, now may be a good time to talk with your Tompkins Financial advisor and review your allocation to emerging markets.

The opening quarter of 2017 was a historic one for Wall Street as the Dow Jones Industrial Average topped 20,000 for the first time. Equities rallied through January and February, then lost momentum in March; even so, the S&P 500 had gained 5.53% YTD when the quarter ended. The Federal Reserve raised the federal funds rate for only the third time in a decade, in response to strengthening inflation pressure and other signals of economic acceleration. Consumer confidence remained high. Commodities had a decidedly mixed quarter. New home sales improved, while existing home sales tapered off. The U.K. took another step toward its Brexit; the U.S. left the Trans-Pacific Partnership. Wall Street kept its hopes up for tax reform and lighter business and banking industry regulation. Read our detailed 2017 first quarter review in our blog.

This material represents an assessment of the market environment at a specific point in time and is not intended to be a forecast of future events, or a guarantee of future results. All economic data is historical and not indicative of future results.

International investing involves special risks such as currency fluctuation and political instability and may not be suitable for all investors. These risks are often heightened for investments in emerging markets.

Investments will fluctuate and when redeemed may be worth more or less than when originally invested. All information is believed to be from reliable sources; however, we make no representation as to its completeness or accuracy.