The inclination of investors to invest the majority, if not all, of their assets in their home country is understandable, but it’s also suboptimal. While U.S. investors may feel comfortable keeping their money within U.S. borders, they have a significant opportunity to diversify their equity portfolio by investing outside of their home market. A globally diversified portfolio can reduce volatility, increase exposure to fast growing economies, and enhance risk-adjusted portfolio returns over the long run. Here’s why you should avoid the pitfalls of home bias and spread out your equity investments across the globe. 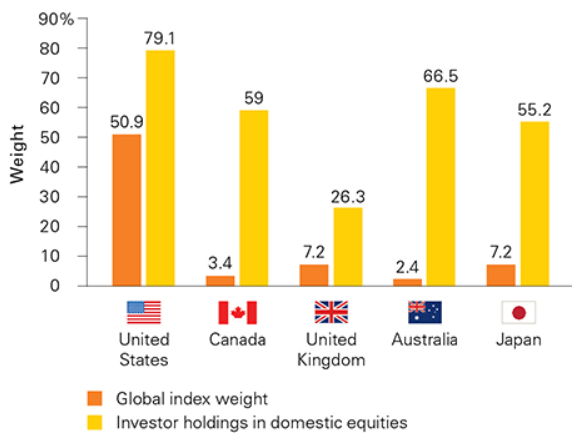 Sources: Vanguard, FactSet, Barclays, Thomson Reuters. Based on data from the IMF’s Coordinated Portfolio Investment Survey (2014). Data as of December 31, 2014 in US dollars. Domestic investment is calculated by subtracting total foreign investment, as reported by the IMF, in a given country from its market capitalization in the MSCI All Country World Index.

The drawbacks of home bias are twofold: increased portfolio risk due to a lack of diversification, and a high potential for missed opportunities (i.e. growth).

Why do investors often overweight their home county by a significant margin? Factors contributing to home bias include familiarity, or “buy what you know,” variation of corporate governance standards around the world, and the fact that multinational companies can have significant exposure to economies around the world. For instance, approximately 40% of revenue of S&P 500 companies comes from outside the U.S. Another factor is investor’s fear of the geopolitical risks and economic uncertainties that seem to plague any particular country on any particular day. Or it could be the perceived complexities associated with investing overseas and dealing with foreign currencies.

Whatever the reason may be, investors would benefit from realizing that investing outside of one’s country is easier than ever, thanks to low cost global and country specific ETFs. Today, an investor can own the entire world with one global ETF, which lowers the barrier to entry by eliminating the need to deal with high transaction costs, foreign currencies, and foreign market access. A low cost global ETF allows an investor to reduce their portfolio concentration risk without having to pick and choose which specific countries to include or exclude based on the news of the day.

Investors have a lot to gain and little to lose when reallocating their portfolios from one with a strong home bias to one that is globally diversified.

The Benefits of a Globally Diversified Portfolio

The rationale behind employing a global investment portfolio is clear – expanding your opportunity set through country diversification can help lower portfolio volatility and boost exposure to fast growing countries at an attractive valuation relative to the U.S.

Comparing the volatility of returns for countries and global markets illustrates that while the U.S. has the lowest volatility relative to other individual countries, a global portfolio produces lower volatility than the U.S. 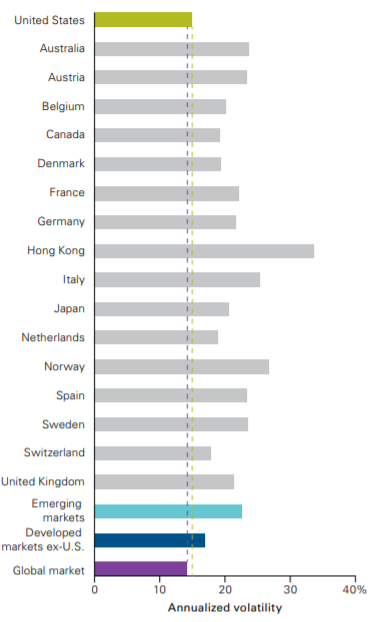 On top of the valuation discount relative to the S&P 500, many emerging markets and developed international economies are growing at a faster rate than the U.S. Furthermore, the long term growth prospects of these emerging economies look favorable given current demographics and population trends. In fact, 90% of people under the age of 30 live in emerging and developing economies, particularly in the Middle East, Africa and Asia. And 88% of the next billion entrants into the middle class will be in Asia. The scale of these country specific populations is leading to massive economic growth. For example, China used more cement from 2011 – 2013 than the U.S. used in the entire 20th century. 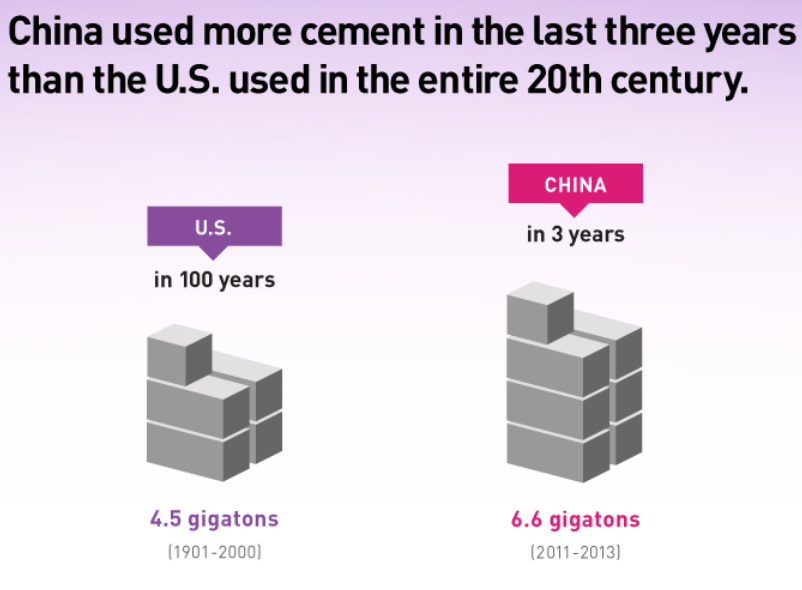 Emerging markets look to be a global bright spot after turning a corner in late 2018.  The outlook for sales and EPS growth is sinking in most of the world but improving in emerging Asia, Middle East and Africa, though they still trade at a discount to world markets.  As of end of February, Emerging Asia's free cash flow yield is 11.4%, about double that of the world. 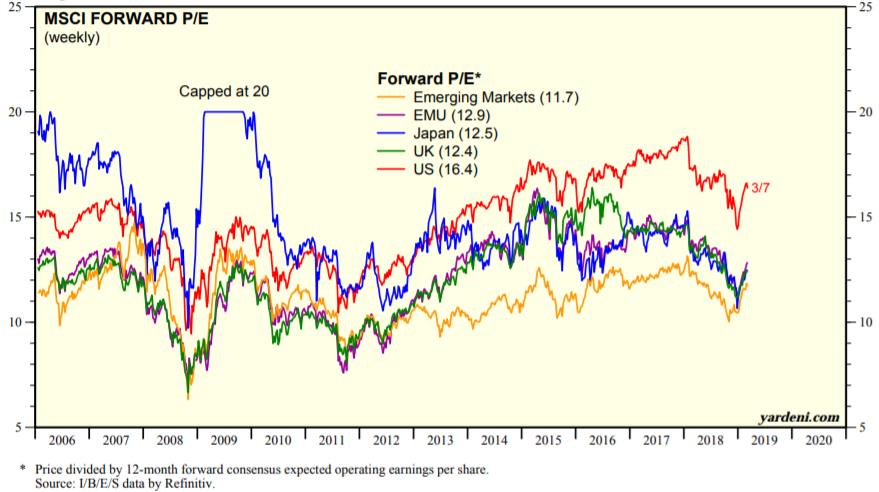 Finally, the adage of “don’t put all your eggs in one basket” applies to geographical investing. An asset class that performs well one year might be a poor performer the following year, and trying to correctly move in and out of the winners and losers on a consistent basis is a near impossible task. So instead, own them all. For example, in 2017 emerging markets and developed international handedly outperformed the S&P 500. Fast forward a year later, and the S&P 500 outperformed relative to emerging markets and developed international. 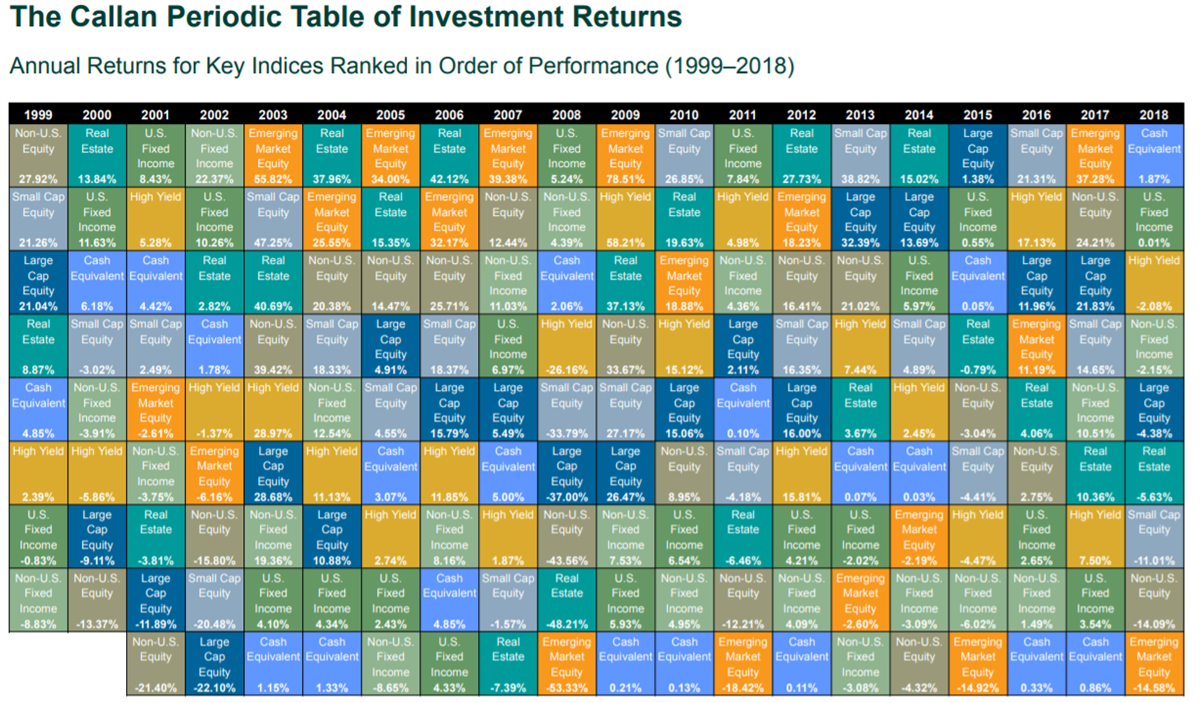 Investors who shun global diversification and stick closer to home with their investments will point out that throughout the majority of the current bull market, the U.S. stock market has outperformed relative to international and emerging markets.

But past performance is not indicative of future returns. While the U.S. has been the best performer relative to other markets since the 2009 bottom, there’s no telling that going forward they will maintain this outperformance. This is known as recency bias, which is the tendency for investors to overweight recent events/trends and ignore long-term evidence. This leads investors to buy after periods of strong performance, when valuations are high and expected future returns are low, and sell after periods of poor performance, when valuations are low and expected future returns are high. Instead, investors should maintain a disciplined approach towards global equity diversification.

Determine How Much to Allocate to International Equities

While the United States remains the largest developed market in the world, its size relative to the entire global equity market capitalization has fluctuated over time. And while the U.S. is still the world’s most dominant economy, its relative share of the global economy is shrinking. The U.S.’s loss in share of global GDP is a gain for fast growing emerging market countries like China, India, and Indonesia. Owning a predominately U.S. portfolio underweights, or excludes entirely, the faster growing portion of the global economy.

The benefits of a globally diversified investment portfolio are too great to ignore. Reduced volatility, attractive valuations, and higher growth rates are just a few reasons that highlight the importance of avoiding investor home bias and expanding your portfolio’s reach outside the U.S. At Tompkins Financial Advisors, we employ investment model strategies that invest in a globally diversified portfolio to reduce portfolio volatility and to gain exposure to the long term growth trends occurring in countries around the world.